The eight-year-old boy watched in awe as the dolphins flipped in the air, dancing to the woman’s chant.
The chant, rose from a deep place within her, in magical lilting notes, and danced over the sparkling waves. It stirred the pod with invisible energy.
The matriarch responded, throwing her calf into the air.
The boy saw nothing else, but the dolphins. He heard little else but the chant. It filled his mind, and every particle of space of the brilliant blue, liquid landscape.
It flowed into him, striking a deep chord within. Frozen in his memory, it was a magical scene under a golden Pacific sun.
Much of Benjamin Dickson’s life now, began that day. On that beautiful morning on the shores of North Wagawaga in Milne Bay, East Papua New Guinea.
The chanter was Dilikoi, his aunt from the Tuooki clan of Uliawa, Milne Bay, Papua New Guinea. She was singing the uliuliyabobo.
‘Dolphins were swimming by, and she went out and started chanting to them,’ he said. Dickson’s eyes lit up at the memory. He was back on the shore at Milne Bay.
After several minutes, Dickson spoke again.
‘When I asked her, she said she was asking the dolphins to throw their babies up into the air for us to see,’ he said.
‘It shocked me to see the dolphins respond.
‘I wanted to learn the chant. My aunt taught me,’ Dickson said.
‘I practised until I knew it by heart. Until I could sing it with a passion.
‘Until the dolphins also heard me and danced,’ he said.
Dickson was a teenager when the dolphins finally responded to his call.
‘I chanted louder. I was cheering when the babies got thrown up,’ Dickson said.
‘I wanted to swim out to them, the urge was that strong,’ he said.
‘It felt like I knew them, and they know me. I swam out, but it was much too deep for me,’ Dickson added.
‘I was hoping they would come right up to me.’
‘It felt like we belonged together, that they were my kin. My blood,’ Dickson said.
‘I felt this deep spiritual kinship with the dolphins. I knew they were my family because they understood me,’ he said.
Dolphins are Dickson’s paternal grandmother’s totem fish.
The 37-year-old artist volunteers his time with the Reweaving the Ecological Mat Project (REM). The Institute for Mission and Research of the Pacific Theological College coordinates REM.
The REM project promotes the adoption of an Ecological Framework for Development, released in a publication recently. 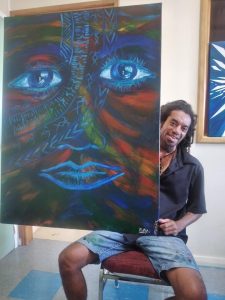 The framework places the wellbeing of people at the centre of development.
Wellbeing for Pacific Islanders includes more than the simple provision of basic needs. Important as well is a sense of belonging and identity with a community. This identity is very much tied to unique cultural values and practices. For indigenous Pacific communities, these practices have their source in nature. Totem’s like Dickson’s dolphin or trees as practised in some parts of Fiji. It may be a bird or herbal plant medicine traditions. Or even turtles.
Grounded on three pillars, ‘Theology’, ‘Economic,’ and ‘Cultural’, the REM Framework says all life is interconnected and should be valued.
The Frameworks says life for the majority of people in the Pacific is difficult to imagine if broken from the land, sky and sea.
Dickson paints these connections. An eagle soaring out of the forests. Majestic trees have people’s faces, signifying oneness with nature. The ocean with its brilliant hues of blue. The graceful moves of a cultural dancer. The powerful strokes of a warriors oars sailing the Pacific in traditional canoes. 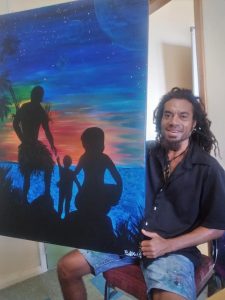 All tell a story. An original account of Pacific peoples and their intimate connections with nature. Vibrant and diverse. One of holistic wellbeing where the web of life mattered, and people were not at its centre. But this is a story subverted by decades of capitalism. Capitalism commodifies the natural world and prioritises human beings.
Dickson’s art exhibition and auction were showcased at the Holiday Inn in Suva on the 30th of September. His paintings are also illustrations in a recently released publication ‘From the Deep – Pasifiki Voices for a New Story,’ with contributing authors from across the Pacific calling for change, for a new vision of development for the Pacific.
The publications, ‘Reweaving the Ecological Mat Framework,’ ‘Ecological Economic Accounts: Towards Intermerate Values,’ and ‘From the Deep: Pasifiki Voices for a New Story,’ and the Art Exhibition are vital activities of the REM project. A project that advocates for a change to the Pacific story of development, by rebuilding the original story.
‘I’m writing with my brush, pleading with people to keep our identity as Pacific people’s alive,’ he said. 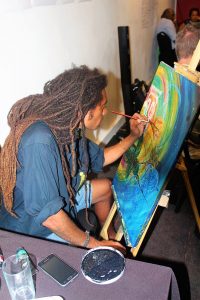 ‘We are stewards. We are custodians. Our duty to God is to keep our natural world alive.’
‘We need to be true to ourselves as Pacific peoples with rich cultures and traditions.
‘We are an ocean of islands that belong together and are unique.’
‘When we lose these connections, we lose our identity as Pacific peoples, and we fail as God’s people.’
Ends…