Striking social, economic and political changes in the Pacific region in the fifteen years following World War II stimulated the various island churches and missions to confer regarding questions facing the church about its own life and about its responsibility to the communities in which each denomination and mission found itself.

With the help of the International Missionary Council, conferences with Pacific-wide

participation were held in April and May of 1961. These recognised the need for a central institution which would provide theological education at a higher level than was available within the Pacific at that time, an education which in a number of ways would better prepare leaders for the churches in the new Pacific that was coming into being.

The Dudley House consultation, which was specifically on theological education, made plans to enlist the cooperation of all church bodies involved in theological training in the Pacific for a central educational institution, and in September 1962 a negotiating committee met in Suva and drew up specific, detailed proposals for the founding and operation of such a college.

The foundation stone for the site was laid down in August 1965 by the Anglican Archbishop of Canterbury, Michael Ramsey. 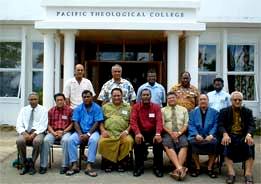 raditions: Anglican, Congregational, Methodist, and Presbyterian/Reformed (Église Évangélique). During the preliminary stages and at various times subsequently, Lutherans and churches representing unions among various traditions have also supported the College. These several traditions are represented on the governing body of the College, the College Council. The following Churches are the owners of the Pacific Theological College:

The Council and Staff of PTC

The Council of PTC has overall authority to determine the policies and finances of the school, and through its Executive (which is appointed by the Council) assists the Principal and staff to implement its decisions and to see to the ongoing programme of the College.

The Principal of the College, subject to Council directives and constitutional provisions, has final control of all the internal affairs of the PTC and responsibility for its common life and the academic and religious welfare of all students. The Principal works very closely with his colleagues in the Faculty in carrying out these responsibilities, and the teaching staff share in the administration when asked.

The teaching staff are assisted in maintaining standards of teaching and examination by a Board of Studies which includes representatives from the University of the South Pacific and the Roman Catholic Seminary. Over the years, as these institutions have come into being and grown, PTC has established a working relationship with both in a number of areas.

By the authority of the Council, PTC currently awards the following degrees and diplomas to those who have completed the set requirements:

The MTh programme began in 1987 with a concentration on Pacific Church History. Programmes in other disciplines have been added since: Biblical Studies in 1989, Church Ministries in 1992 and Theology in 1993. From 1999 onward, an integrated MTh programme has been offered. Since 1993, all MTh students who complete the first year of the programme with a grade average of at least a C are awarded the Post-Graduate Diploma in the discipline being studied. In 2004, PhD studies were introduced in partnership with Charles Sturt University (Australia). This was reviewed by the College Council in 2007, and the Council decided that from 2008, PTC will offer its own PhD programme. The first PhD was conferred in 2014.

In addition to the theology awards listed, PTC also awards a Certificate of Studies for Women to those who complete the course of studies offered in the Women’s Progamme. All students, including those who study part-time and those who do not complete all the requirements for a degree or a diploma, receive an academic transcript indicating the courses taken and the grades achieved.

PTC was the first educational institution, secular or religious, within the region to offer studies at degree level and award an internationally accepted degree.

From the opening of the college in April 1966 under the leadership of the first Principal, the Rev Dr George A. F. Knight, PTC established an international reputation for quality theological education at degree and diploma levels, particularly in the three core areas of Biblical Studies (including biblical languages), Theology, and History of Christianity. At that time the buildings on campus (the teaching and office block, single students’ dormitory, staff houses, and the first married students’ flats) were completed with the help of a block grant from the Theological Educational Fund (now Ecumenical Theological Education or ETE) of the World Council of Churches, contributions from mission boards, and individual donors. During that time, funds were also raised for a fine library building which now graces the College. The library houses now more than 30,000 volumes.

He encouraged the development of PTC’s Field Work Programme and emphasised Pastoral and Development Studies. At the same time more attention was given to the Pacific orientation of the curriculum and the broader development of College life.

The Pacific orientation of the curriculum and the broader development of College life was brought to fuller fruition during his tenure as Principal. In addition, a unique Women’s Programme was developed for student wives and other women which involved, besides the establishment of the Programme, the building of a child-care centre and more flats for couples and single women.

Became the fourth Principal of the College at a time when new opportunities and challenges had presented themselves – particularly a request to develop a graduate programme at Master’s level. Under his leadership this programme was begun. In 1989 he left to undertake further studies at the Melbourne College of Divinity. He returned to PTC in 1993 to take up a lecturing position in Theology.

During his three years as principal much was accomplished, including extensions to the Etina Havea Centre, the building of six student flats, two classrooms and four staff offices, the beginning of the Women’s Centre, and the strengthening of the academic programme. For health reasons, Dr Latukefu was forced to cut short his stay at the College at the end of 1991.

He took office in January 1992 and completed his term in 1994. He facilitated the development of the new contextual curriculum.

The Reverend Prof Nokise became the eighth Principal of the College.

Rev Prof Dr Upolu Luma Vaai from the Methodist Church in Samoa was appointed the ninth Principal of the College, to begin this role in January 2019