At just twenty years old, Nancy Catherine Vakatawa is the youngest church representative enrolled in an accredited four-weeks-long Certificate in Social Analysis Course held in Suva, Fiji recently.
Most of her fellow students are at least twice her age or much older with a wealth of experience in church work and dealing with social issues.
Some are church Ministers; others are heads of organisations. Ms Vakatawa said some moments in training, she felt inadequate, dwarfed by the combined years of wisdom in the classroom.
But made of tougher mettle, the young lass uses the experience as a great learning curve. One that will add to an already impressive repertoire. 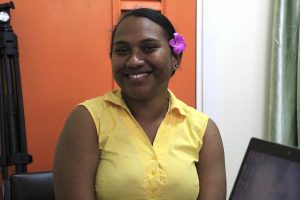 Apart from her University Studies, Ms Vakatawa is also a Sunday School teacher, Secretary of the St Johns Bible Study Club and a social worker.
‘I am learning so much, just listening to all that combined wisdom borne of experience,’ she laughingly remarks.
‘I am a very blessed young person to be here to gain insights beyond my years.’
However, Ms Vakatawa’s insight was already ahead of her years and many peers, even before she joined the training.
Early this year, with a group of friends, she helped fundraise and build a new home for an elderly woman at Wailoku Settlement, just outside Suva city.
‘The day I met her for the first time, I felt hurt and mostly sad when I saw her run-down shack,’ Ms Vakatawa said.
‘The corrugated iron and pieces of timber were barely stuck together,’ she added.
‘Another tough wind and the house would have buried her.’
It was an eye-opener for the young Ra (a province) woman, vasu (maternal links) Kadavu (an island province).
‘Poverty never felt so oppressive until I met that old lady. Really, really felt bad for her suffering,’ said Ms Vakatawa, a sadness tingeing her eyes.
Increasing numbers of people enduring terrible living conditions in dilapidated and dangerous housing and squatting in mangrove swamps are one of the indicators of rising poverty in Fiji.
At least 30 per cent of Fijian’s are classified as living below the National Poverty Line.
A social scourge, poverty as a social justice issue is one of the Course’s focus topics, earning the dedication of an entire week.
Lyn Lala, the Institute for Mission and Research’s (IMR’s) Project Officer Social Analysis said the aim of the Course is to educate its participants on social issues that afflict the context, in this case, Fiji.
‘They are taught skills in analysing causes of social issues like poverty and identifying possible solutions,’ said Ms Lala.
‘The course is founded on the premise, ‘what would Jesus do?’ she added.
‘It’s a challenge as well to the churches to reach out beyond the pulpit and assist its communities with the social issues they face.’
Despite depressing poverty statistics, Ms Vakatawa is optimistic young people can make a difference.
‘Young people can totally make a difference, they can do something to help,’ she said.
‘Poverty is not going to go away, but we can alleviate the suffering somewhat if only we act.’
Director of IMR Aisake Casimira said it is important to mentor young people to raise leaders the likes of visionary forebears including Ratu Sir Kamisese Mara from Fiji and Father Walter Lini from Vanuatu.
‘There is a vacuum now in visionary leaders because the mentoring of future leaders has been neglected by our effort as a region to meet demands of a borrowed system that was a need at the time when many Pacific island countries gained independence,’ he said.
‘But we need to mentor our young people now because they are our best opportunity to make changes in our communities.’
The Social Analysis Course ended on September 17.