Challenging the dominant thinking of a people will almost always incur a backlash.

But what if the people are your own, and the concept that you want to challenge is age old, revered and sacred and theological? It could be tantamount to heresy and make the challenger, a heretic. Who wants to be a pariah, amongst his own people? No one.

‘My greatest fear is that 100 years from now, my people will look back at history and say that the God of Abraham, Isaac and Jacob, abandoned them because they wrongly interpreted his providence!’

Reverend Sopepa, is a PhD student at the Pacific Theological College. He is referring to the people of Tuvalu and the threats of their homeland drowning under the waves of climate change.

‘Climate change is real. Yet they cling tightly to the belief that God’s providence will not allow Tuvalu to disappear under the water,’ said Reverend Sopepa.

‘Climate realities record waves swamping the land and remind that perhaps there is a need for the reinterpretation of the providence of God and provide an alternative for the people of Tuvalu,’ he added.

Reverend Sopepa says a dominant theological belief that pervades his homeland and the Pacific island countries is that everything happens according to the will of God. 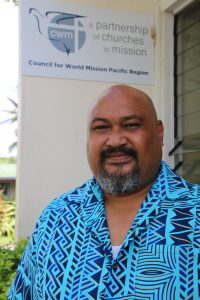 Predestination is a doctrine in Calvinism, or the theological thinking put forward by French theologian John Calvin. Calvinists believe God controls everything in the world and predestines all that happens, even the day we die.

‘Climate change is human induced, just as are premature deaths caused by non-communicable diseases,’ he said.

Instead, he is focusing his research on God’s providence for his Doctoral studies at the Pacific Theological College guided by the Tuvaluan ‘Folau’ concept of navigation.

‘The ‘Folau’ concept is that everyone moves or navigates with a purpose, whether the outcome is good or bad – this may offer an alternative on the explanation of God’s providence.

‘As such climate change and the sea level rise we face as a people is perhaps a journey that we are taking, on a spiritual level, and perhaps one day it may result in a physical relocation but these are matters I am researching on.’

‘I don’t know what the outcomes will be – the one thing I am clear about is I don’t want a scenario 100 years from now, they hang all their hopes and beliefs in God, and Tuvalu disappears and they blame God for abandoning them.’

‘That can only happen if there are not alternative definitions of God’s providence provided and in doing this research I am also contributing to Pacific theology.
‘It is important to challenge people to have an open mind to change in their theological thinking.’

‘That is one of the best things I enjoy about studying at PTC i.e. the rethinking of theology as it was taught to us by missionaries who based it on their own Western cultures and thinking.’

Instead Reverend Sopepa believes the indigenous values, so pacifically oriented, and untainted by capitalist market influences needs to be promoted more as part of the new theological thinking. Values of sharing and caring; of communalism over individuality; of heaven as a way of life as opposed to just a destination.

‘It’s the type of theology that is discussed and allowed here in the PTC space. This is a space of diversity and learning, of becoming church leaders molded to respond to the challenges of the people in the here and the now!’ he said.

Aside from being a part time PhD student, Reverend Sopepa, descended of church ministers, is also the Regional Coordinator for the Council for World Mission in the Pacific. He was formerly the moderator of the Ekalesia Kelisiano Tuvalu.

‘It’s tough to work and study part time,’ he said.

But as they say, the higher the calling, tougher the journey. A calling to lead the church during a time of climate gloom requires so much more of a minister, now then before.

‘As church leaders, we must educate our people on what we can do, the realities that we must face, and the diversity of the different Pacific islands contexts, otherwise are only talking in abstracts.

‘And that is another reason I enjoy studying at PTC – we are grounded in the realities our communities face, trained to practice beyond the pulpit and help deal with some of our regions biggest challenges.’