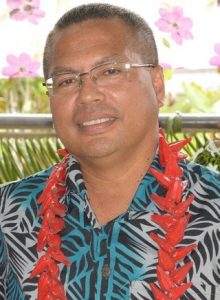 Prior to coming to PTC, Fatilua received his PhD from the Rockefeller College of Public Affairs, State University of New York at Albany in 2008 with specialization in Public Administration and Policy. His professional experience includes serving 5 years in the United States Congress House of Representatives as a legislative staffer to Congressman Eni Faleomavaega Hunkin, the former Delegate of American Samoa. His legislative portfolio included covering the works of the U.S. House Committee on Natural Resources, as well as US legislation and policies concerning U.S. Territories and the Pacific region.

Fatilua has also worked as the Executive Director for the Samoan Community Development Center, a community-based organization for Samoans and Pacific Islanders in the San Francisco Bay Area, California USA, working on a variety of issues including immigration, housing, job placement, social welfare, education, and general advocacy for the needs of low-income people.

After entering the ministry in 2013, Fatilua graduated in 2016 from Malua Theological College in Samoa with a BD, before completing his MTh (distinction) from PTC in 2018. He is currently working as a Lecturer at PTC as well as working towards a PhD in Biblical Studies.